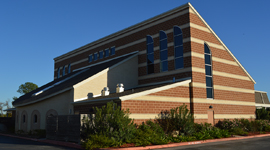 This parish of the Houston-area Catholic Church community was looking to update and renovate its existing facilities to meet the demands of its growing attendance. The renovated space included accommodations for a renovated Sanctuary, new Chapel, new arts/music rooms and a new set of classrooms. The addition took the building height to over 40-ft above finished floor, while remaining a one-story space. Extensive review of as-built documentation and on-site surveys helped the design team determine which parts of the existing framing could be salvage under the new design intent. Also included in the construction was a new 30-ft tall bell tower, clad entirely in brick masonry.
CHALLENGES:

The height of the new construction called for in-wall tube steel bracing to ensure limited lateral movement of the building, as well as, for limiting the vertical span of light-gage studs that were used to frame the walls themselves. This was critical to the performance of the facility, as a differential lateral drift between the new and existing buildings could result in damage to each of the structures, particularly under hurricane-force winds. The relatively thin dimension of the bell tower, in plan view, necessitated the use of heavy structural steel tube column sections. In a few locations, structural analysis and a retrofit solution was designed in order to install new masonry ledges off the side of existing foundation beams for new support of new brick elements.

In order to match existing roof geometries, as well as, provide for ease of connection from new framing to existing framing, structural steel and bar joists were selected for use at the new roof at the Chapel and Sanctuary. Light-gage Z-purlins, with in-plane rod bracing, were used for roof joists at the classroom addition, to match existing construction in that area. K-braces were used in locations where man-doors would have otherwise interfered with the structural framing. A new cast-in-place concrete baptistery was installed in the Sanctuary, which required saw-cutting the foundation and use of continuous water-stops to prevent potential moisture migration through the new/existing foundation interface in the future. 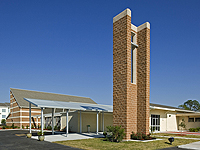 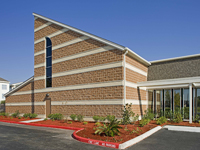 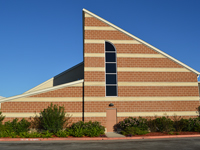 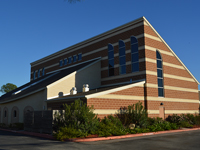 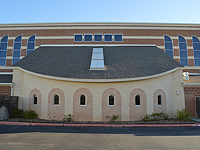 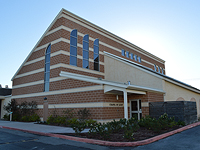 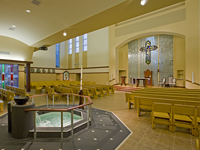 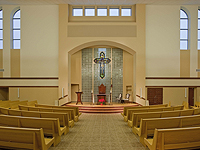 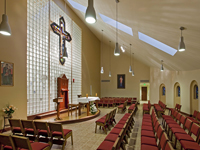