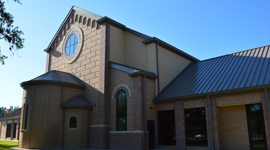 In order to accommodate a growing congregation, this Friendswood, Texas-based parish decided to construct a new Sanctuary for its parishioners. The facility also includes a narthex, Sacristy, quieting room, music rehearsal space and a 200-seat chapel integrated under the same roof. The nave seats 1,700 people, including 60 choir members, with organ piping mounted at the rear. There are also two twin bell towers at the front of the church that each span over 65 feet vertically. Due to proximity to the coast line, the project required windstorm certification from the Texas Department of Insurance, for which Pinnacle provided reviews and documentation.
CHALLENGES:

At the portions of the nave that turn to the North and South (forming the arms of the cruciform), due to size limitations and characteristics of wood elements, it was not possible to use a glulam truss as a girder to carry the high roof trusses that pass through the nave. Pinnacle instead designed a heavy structural steel stress to carry these loads, within specified deflection tolerances, and Tellepsen Builders (general contractor on the project) clad the truss with wood to match the remainder of the glulam structure. A similar truss was used at the entry to the chapel from the Sanctuary. In addition, a structural element spanning 30 feet was required at a portion of the church known as the “Reredos”, near the front of the nave. In order to save on weight, cost and time. Pinnacle designed a truss, constructed of back-to-back light-gage members using standard screws at the connections.

The roof structure in the nave and chapel consists of 2” (nominal thickness) tongue-and-groove wood decking over glulam timber trusses that span 70 feet across the nave. Structural steel was used to support the trusses, as well as, to frame the portions of the roof that were not exposed to view. Steel was also used extensively at the gable ends of the church, which extend over 50 feet above grade, to support brick and cast-stone masonry and help protect the brittle facade materials against excessive deflection and curvature under hurricane-force winds. The mechanical mezzanines throughout the facility employ composite steel construction in order to minimize lead time and reduce vibration due to the mechanical units that they support. A combination of moment frames at the high portion of the roof and braced frames at the low portion were used to carry all lateral loads on the building. 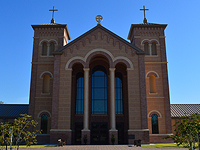 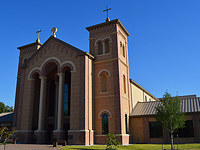 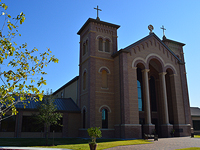 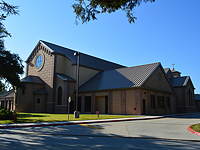 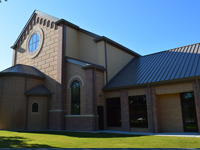 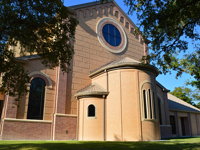 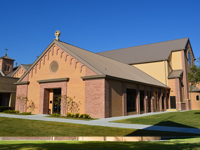