Our Lady of Guadalupe CATHOLIC CHURCH 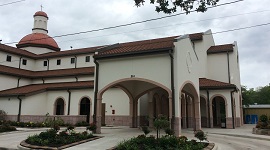 Owner: Our Lady of Guadalupe

This new sanctuary building located in Rosenberg, Texas features a narthex, a large nave and altar, and prayer gardens. The 600-seat nave also includes a baptismal font and sacristy, with a cupola directly over the main altar. The nave is has no columns within the space and the large steel trusses spanning the building width are visible as they arch under the edges of the cupola. Natural light is introduced through high windows built between truss web members. The tongue-and-groove wood decking and glulam beams at the roof extenuate the openness of the space.
CHALLENGES:

The most significant challenge presented by this sanctuary was the design and construction of the long span roof trusses. To achieve the arched look at all four sides of the cupola, we designed two 110-ft trusses that spanned the width of the nave with two constant depth sections at either end and a varying depth (sloped top chord and arched bottom chord) section at the center. Once these two trusses were erected, six shorter span trusses were built between the long trusses and on either side. These trusses support the entire high roof at the nave.

The roof structure consisted of different types; a tongue-and-groove wood decking over glulam timber beams (within the interior) as well as over structural tube members (at the exterior canopy) and steel roof deck over bar joists elsewhere. Structural steel was used as the main framing system. The two long trusses were transported in pieces and constructed on the ground, while the short trusses consisted of three separate segments that were connected to the long trusses in place. The lateral stability of the building was achieved with a combination of moment frames and braced frames. The long trusses were also utilized to resist lateral loads applied to the nave walls. 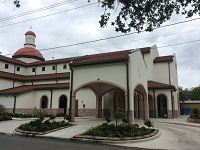 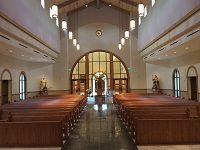 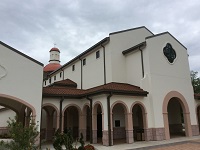 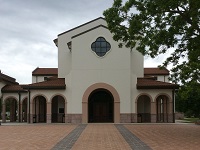 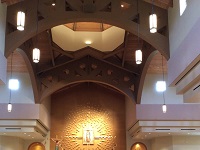