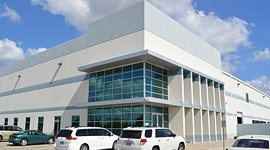 A prime example of Houston’s large-volume distribution warehouse market, this facility consists of a single-story, tilt-wall building housing over 300,000 square feet of lease space to be utilized for both office and warehouse functionality. The building’s features include a 30-ft minimum clear height throughout the interior of the building, 10-ft parapets at the east and west ends of the building and over a dozen signature “fin” panels at the corner entrances to achieve specific aesthetic considerations that were dictated by the architect. These “fin” panels were also designed to transfer gravity and wind loads from load-bearing panels resting above, down to the concrete foundation elements. The tilt panels on the east end of the building also provide prominent signage along Highway 290.
CHALLENGES:

At the three primary building entrances, supplementary structural steel elements were designed and carefully detailed to support panels completely internally, resulting in the desired visual effect from the exterior of tilt-panels seemingly suspended over curtainwall systems. Tube steel beams were detailed at the corner entrances to facilitate the inclusion of a cantilever canopy “eyebrow” at these locations. Tilt-wall panels, steel columns and drilled concrete footings on the east end of the building were designed for over 10,000 square feet of future mezzanine to be added, if so desired by the tenants. In addition, many of the tilt-wall panels on the south side of the building were designed to accommodate lifts that allow dock-high access for delivery trucks.

The structure consists of joists, joist girders and structural steel at the roof supported, along the perimeter, by concrete tilt-wall panels. Due to the size of the building, two expansion joints were designed and detailed to accommodate structural expansion and contraction through the life of the facility. Five tube steel X-braces were installed at the expansion joints in order to handle all lateral load considerations and keep the building’s drift under code-prescribed limitations. Curtainwall elements were incorporated at the entrances of the building, supported by secondary steel framing and concrete panel edges. Cantilevered tilt-wall panels were designed as screen walls at the building’s southern access ramps. 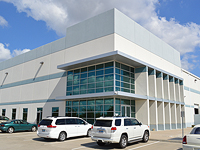 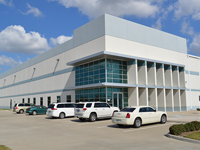 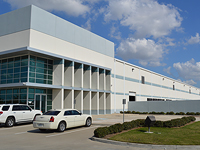 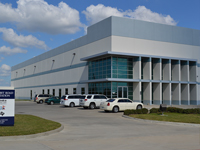 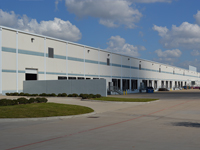