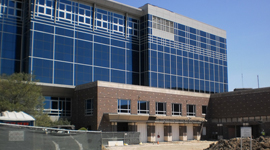 This is a two story addition to an existing facility. The addition attaches to two different phases of construction. Also, the structure for the addition has been designed to support two additional levels of vertical construction in the future. The facility has been designed to support two catheterization labs and supporting services. The mechanical equipment will be installed on a portion of the roof of the addition (future third floor), and will be enclosed to protect it from the elements.

Existing floor elevations in the existing building dictated that the structural depth be minimized for the addition. Therefore, a flat slab with drop panels was selected as the structural system. With the mechanical equipment located on the future third floor and its need to be enclosed, the cast-in-place concrete system was continued at this area. This results in a portion of the future fourth floor being constructed now as the roof over the mechanical equipment. Decisions were influenced by the desire to minimize disruption to the mechanical services during future expansion.

The structure consists of a cast-in-place, two-way flat slab with drop panels at the columns to minimize structural depth. Concrete beams are utilized at the exterior of the addition to support the brick façade. There is a drop-off canopy at the building entry, formed with structural steel and connected to the building using embedded steel plates. The structure is detailed to accommodate a future vertical expansion of two floors. 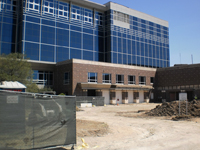 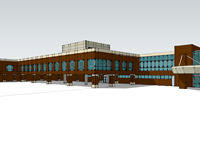 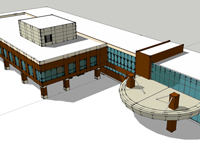 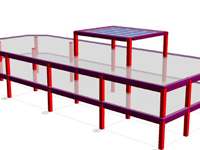