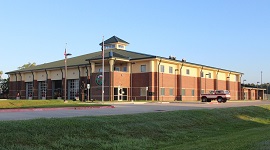 The City of Santa Fe Fire Department was in need of a greater station capacity for four additional full-size fire trucks and there was in sufficient space in their existing facilities, so a new station was commissioned in 2010.  The new fire station includes offices, gear storage and a meeting room at the ground floor; and the second floor includes lockers, dorms, a briefing room and joint kitchen/dining room.  Exterior cladding consists of a combination of brick veneer and stucco, with standing seam metal panel being utilized at the roofs.  The cupola on top of the hipped roof at the apparatus bay rises more than 40 feet above the concrete slab.  Hollow structural steel frames were designed at the apparatus bay doors to support the heavy roll-down doors that the City wanted for the facility.

Coped wide-flange beam extensions were used at column lines to achieve the roof profile that the architectural designers wanted while maintaining the maximum required spacing for roof deck support.  The combination of Tectum planks at the apparatus bay and standard B-type metal deck at the balance of the roof presented detailing challenges at the interfaces where they met, due to the significant different in their thicknesses.  Miscellaneous steel was used to make-up the difference and allow roof diaphragm forces to transfer properly along these lines.  In addition, Pinnacle provided windstorm certification services for the entire building, due to its proximity to the Texas coastline.

The structural system for the fire station consists of a primary structural steel column and beam system with steel bar joists at the roof.  The roof diaphragm is a hybrid system, using both 1.5 inch metal deck and 3.5 inch Tectum deck.  Thirty-six inch deep wide-flange bent beams, weighing approximately 150 pounds per lineal foot, serve as the main frames that cross the apparatus bay and brace the building against lateral forces while limiting sway of the building in high winds.   Structural steel was also used to frame the station’s tower, balcony, cupola, and the mechanical mezzanine and exposed stair landings in the apparatus bay. 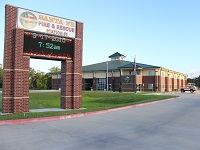 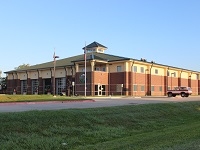 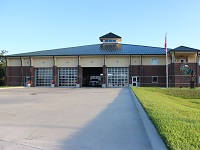